I just returned from a silent meditation retreat in the Trinity Alps in northern California. My beloved, who is a web designer, gifted me with a stay at the off-the-grid retreat cabin belonging to one of her clients. Here was a place I could live for several days in solitude, write, and listen to the hush of whispering pines and the varying rhythms of my own heartbeat as I wrestled with some of my own inner demons.

In need of some kind of transformation, I’d been craving this kind of time and heart space, especially as I’ve been trying to complete a difficult letter that has taken me a long time to write. Its been one of those projects where I felt an inner drive to complete it at the same time I felt an utterly stiff-armed (and stiff-legged) pushback to the kind of letting go I needed to do. 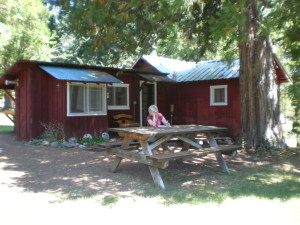 I arrived at the retreat cabin grumpy, sweaty and resistant. Even though a part of me did realize that it was a complete privilege to stay here for the week, what I mostly felt was afraid—scared that the resistance I had been wrestling with would just linger, take me over, eat me alive and that I would never get to the place of balance I was longing for.  Even though I have taken many solo silent retreats over the years, this time I was entrenched in my “I don’t wanna” mindset and deep in the throes of “who-do-you-think-you-are??-itis.”

One evening, I sat outside with my journal facing a semi-circle of tall trees. Every now and then I’d look up from writing and breathe in the Trinity mountain air that is as fragrant as the most delectable wine.  My mind began to drift, my body relax, I found myself gazing at a small semi-circle of trees in front of me. In a little while, several of them appeared to take on different kinds of personas, as though possessed by tree spirit elders who towered over me with authority and grace. The branches of one tree looked like a many-armed Hindu goddess wafting energy my way as her branches danced in the frequent gusts of wind. Another had a face near the top that looked like a benevolently smiling, child-like little bear, gazing down at me with utter delight. High in the upper branches of yet another tree, I was able to make out another more neutral

looking female face. With branches above her head that looked like a headdress, she seemed dignified, regal and somehow a little remote. At the same time, she seemed utterly compassionate—a Kwan Yin* of the pines.

As I gazed at her, my thoughts turned back to the writing I’d been doing. Although the mosquitoes had subsided earlier, I felt plagued by gnats of negative emotion. “I can’t do it.” “I’m not worthy” “I don’t want to” blah blah blah. I felt surrounded by a bubble of negativity, as though I was Pigpen (from Peanuts) surrounded by a dusty cloud of resistance.

In the middle of my descent, I looked back up at the tree circle. To my dismay, the Kwan Yin of the trees appeared to withdraw, pulling back from visibility and blending into the branches until I could no longer make her out.  Urgently, I squinted and hunched, trying to make her out again, but no luck.

I leaned back in my chair, closed my eyes and brought my focus to my breath. As I did, I allowed the nagging of my brain mutter to fade away. I shifted my focus back to sipping the intoxicating air, and appreciating the quiet. When I opened my eyes, I saw, to my delight, that the tree goddess had returned to the upper branches, her branches gently swaying as though she was wafting good energy my way.

I began to play with my thoughts: When I invoked negative self-punishing images, she would fade.  When I shifted my focus to gratitude, presence, and curiosity, she re-emerged. I was enchanted with this visceral experiment as I played with seeing how by simply choosing where to place my focus, the world around me seemed to change, bringing home Wayne Dyer’s axiom, “Change the way you look at things, and the things you look at change.”

Have you ever experienced taing a deep breath to readjust your focus from feeling like a victim to one of gratitude?  What do you do to pivot when you are feeling self-doubting, angry or lost?